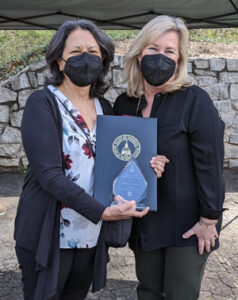 Tamara Carrera, CAC’s recently retired CEO of 23 years, was awarded the 2021 Yellow Rose Nikki T. Randall Servant Leader Award. Shea Roberts, Georgia State Representative from District 52, sponsored the resolution of the Georgia Women’s Legislative Caucus. Rep. Roberts presented the award to Ms. Carrera at the Community Assistance Center in late March with some of the nonprofit’s board and staff in attendance.

Prior to that, the Fulton County Board of Commissioners has issued a proclamation honoring Tamara Carrera, CAC’s recently retired CEO. The proclamation was presented to Ms. Carrera by Bob Ellis, Fulton County District 2 Commissioner and reads in part:
“The board of commissioners commends the many contributions of Tamara Carrera to the local community and celebrate with her and her family on the occasion of her retirement, and does hereby proclaim Wednesday, March 17, 2021 as Tamara Carrera Appreciation Day in Fulton County.”
Under Carrera’s leadership CAC has become widely recognized as the cornerstone emergency human services agency preventing homelessness and hunger in the Sandy Springs and Dunwoody communities. CAC ensures that thousands of families do not become homeless or go hungry and have a pathway to lift themselves from temporary or chronic poverty.

Carrera was the driving force behind CAC’s growth from a small charity initially housed at a scout hut at the Mount Vernon Presbyterian campus, providing food and clothing to about 280 families a year, to the go-to emergency assistance agency serving more than 6,500 individuals a year from 3,000 households.

“Tamara’s outstanding leadership has put CAC on the national map as an exemplary model of a successful nonprofit assistance agency,” said CAC past Board Chair Nancy Berger. “For 23 years Tamara has championed the needs of our lower-income families and those who fall on hard times. She will be missed at CAC and in the community.”

During her tenure Carrera built what CAC founders envisioned – a network of people, organizations and resources all focused on helping those who struggle in our community to overcome crisis situations and to achieve progress and stability.

When the city of Sandy Springs was founded, the leaders of the community, especially founding Mayor Eva Galambos, recognized that they could build the city’s human services program around the network that CAC had already established rather than start from scratch. When the COVID pandemic hit, the stability of CAC’s network and infrastructure enabled the nonprofit quickly adjust to the situation and to immediately aid affected residents of Sandy Springs and Dunwoody.

Originally joining CAC as a volunteer in 1993, Carrera was hired in 1997 to be the nonprofit’s fourth director. CAC was founded in 1987 by 10 local religious congregations of multiple faiths looking to provide and centralize assistance to address growing poverty in the community despite the area’s developing affluence.

Laura DeLong was part of the Personnel Committee that hired Carrera and DeLong was elected board president shortly thereafter.

“Tamara worked tirelessly to develop a diverse network of volunteers, donors and supporting congregations to reflect all socio-economic levels, multiple ethnicities and religious faiths who come together to work in harmony to help our neighbors improve their lives,” said DeLong.

With an MBA specialized in Nonprofit Management and experiences acquired through community involvement in Boston, Long Island and Atlanta, Carrera possessed both the heart and the skills to turn CAC from a $24,000 a year operation in 1988 into one with a budget over $5M and 18 staff members, more than 400 volunteers, multiple service delivery partners and a robust base of supporting religious congregations, individual, foundation and corporate donors in 2020.

At the center of CAC is the community that supports it. CAC is a donor-supported, volunteer-driven organization.  From her first days at CAC Carrera instilled her values of compassionate assistance and respect for others in CAC’s service model. She strongly believes that people in need should have somewhere to turn to for assistance and that communities inherently want to help their neighbors through difficult times, and CAC is a means to that end.

Carrera has carried her faith in the human spirit over to each and every volunteer, board member and professional team member involved at CAC during her tenure. This belief system is deeply embedded in the culture of CAC and is truly the magic that transforms lives.

You have Successfully Subscribed!